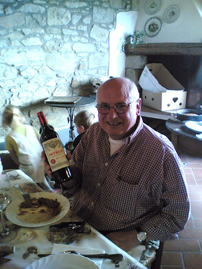 Vittorio Fiore was born at Fortezza in the province of Bolzano and lived the years of his childhood in this spot, in full contact with the natural beauties which surrounds this marvellous area, an experience which perhaps inspired his decision to dedicate his studies to agriculture and the natural world.

After completing his professional preparation, first at San Michele all’Adige and then at the Oenological School of Conegliano Veneto, he began his professional career, working at various wine-producing firms in northern Italy in the early 1960’s.

In 1970 he was charged with general direction of the Asociation of Italian Oeno-Technicians (today the Association of Italian Oenologists), a position which he held until the end of the 1970’s when he decided to move to Tuscany. In this period – thanks as well as various study trips abroad – he developed a wider awareness and knowledge of the viticultural and oenological world, increasing as well his technical preparation and capabilities.

He arrived in Tuscany in 1979 and began the type of professional career which he had, first among colleagues, conceived in the 1960’s: the oenologist as consultant, as a free professional. And thus began to work with various wine producing properties which, from his experience, drew inspiration to renew and re-conceive their work both from the viticultural and the oenological point of view.

For this contribution he is unanimously considered one of the major figures in the successful re-foundation of Tuscan viticulture, to the point that the regional government, the Institute for Foreign Commerce (ICE), and the Enoteca Italiana of Siena frequently avail themselves of his services as world-wide ambassador for the promotion and the diffusion of knowledge of Italian wine.

From 2003 to 2008 he was a member of the Commission of Appeal for the appellation (DOC and DOCG) wines of central Italy at the Ministry of Agricultural and Forest Policies; he was also named professor and chair holder of the course of Sensory Analysis for doctoral candidates in Viticulture and Oenology, at the Faculty of Agriculture of the University of Pisa.

After many years of consulting work and of wines for other producers, he was able, in 1992, to realize a long-held dream: that of creating his own proprietary wine estate. Together with his wife Adriana he acquired, in that year, the Poggio Scalette farm on the Ruffoli hill in the township of Greve in Chianti which, in a short space of time, became one of Tuscany’s, and Italy’s, most prestigious wine estates. Thanks as well to the crucial contribution of his son Jurij, a professional winemaker trained at Beaune in Burgundy, who runs the property.

Today Vittorio Fiore continues, in addition, his consulting work with the numerous and important estates with which he collaborates.